General Santos City has a  reportorial program wherein the members of the competitiveness cluster will  report  the outcome of their many years of hard work and the impact that the said initiatives have created in stirring the city’s economy.

Dubbed as the General Santos City Report on Economy and Trade (GREAT), this activity aims to bridge the information gap between the  city’s economic enablers and its economic drivers. 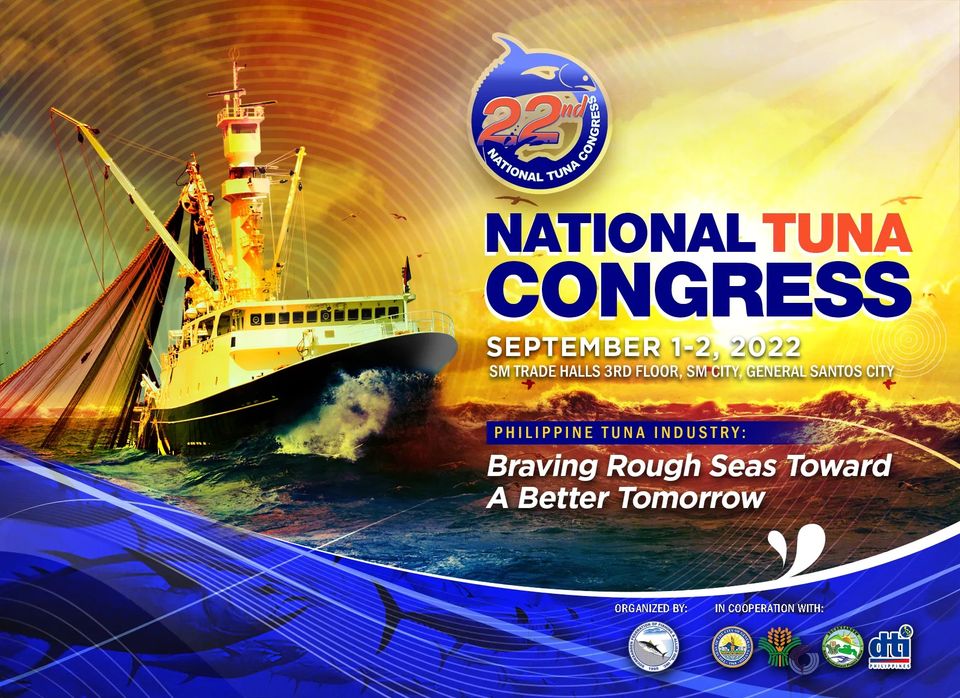 To position General Santos City as one of the prime investment and tourism destinations in Asia, an activity that sustains and elevates the Tuna Industry or the fishery sector of General Santos City, is established  to ensure sector productivity and income. This activity is dubbed as the Tuna Congress.

The Tuna Congress is an activity which aims to encourage economic activities and programs, which promote investments and tourism development in General Santos City.  Specifically it aims to promote the Tuna Industry through the development  of its value chain, thus creating allied-related industries and jobs for the city.

This activity also allows the city to maximize its potential as GenSan's investment and tourism products are promoted to potential investors who can help sustain the city's competitive advantage in the global trend vis-à-vis BIMP EAGA directions and ASEAN integration and new development prospects.

The Tuna Conference or Forum is a two-day conference that provides status and updates about the industry. It also serves as a guide and introduce innovations for the development of other sub-sectors in the industry through panel discussions and presentation of case study on the major changes in the tuna industry or fishery sector across the world. 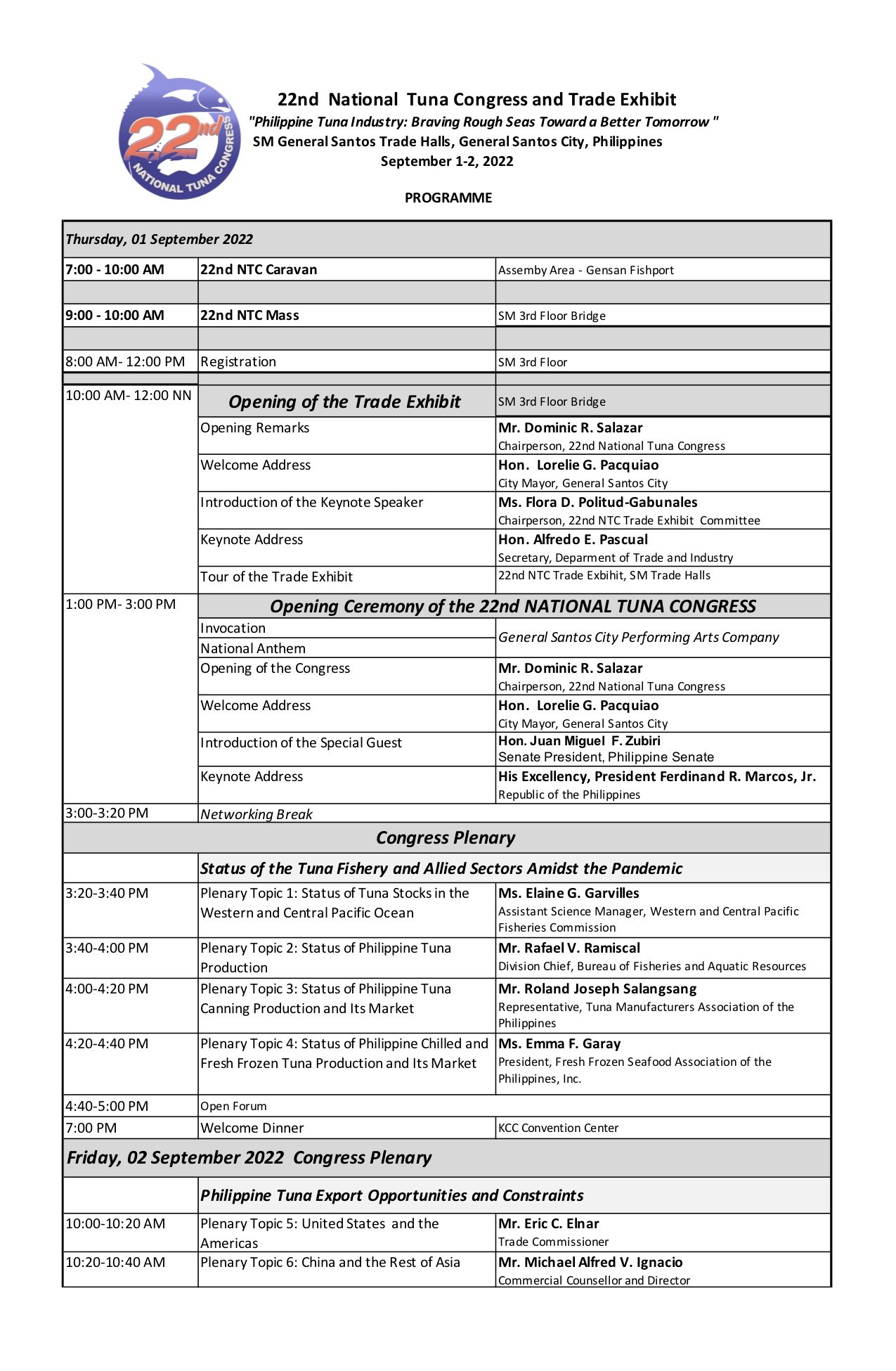 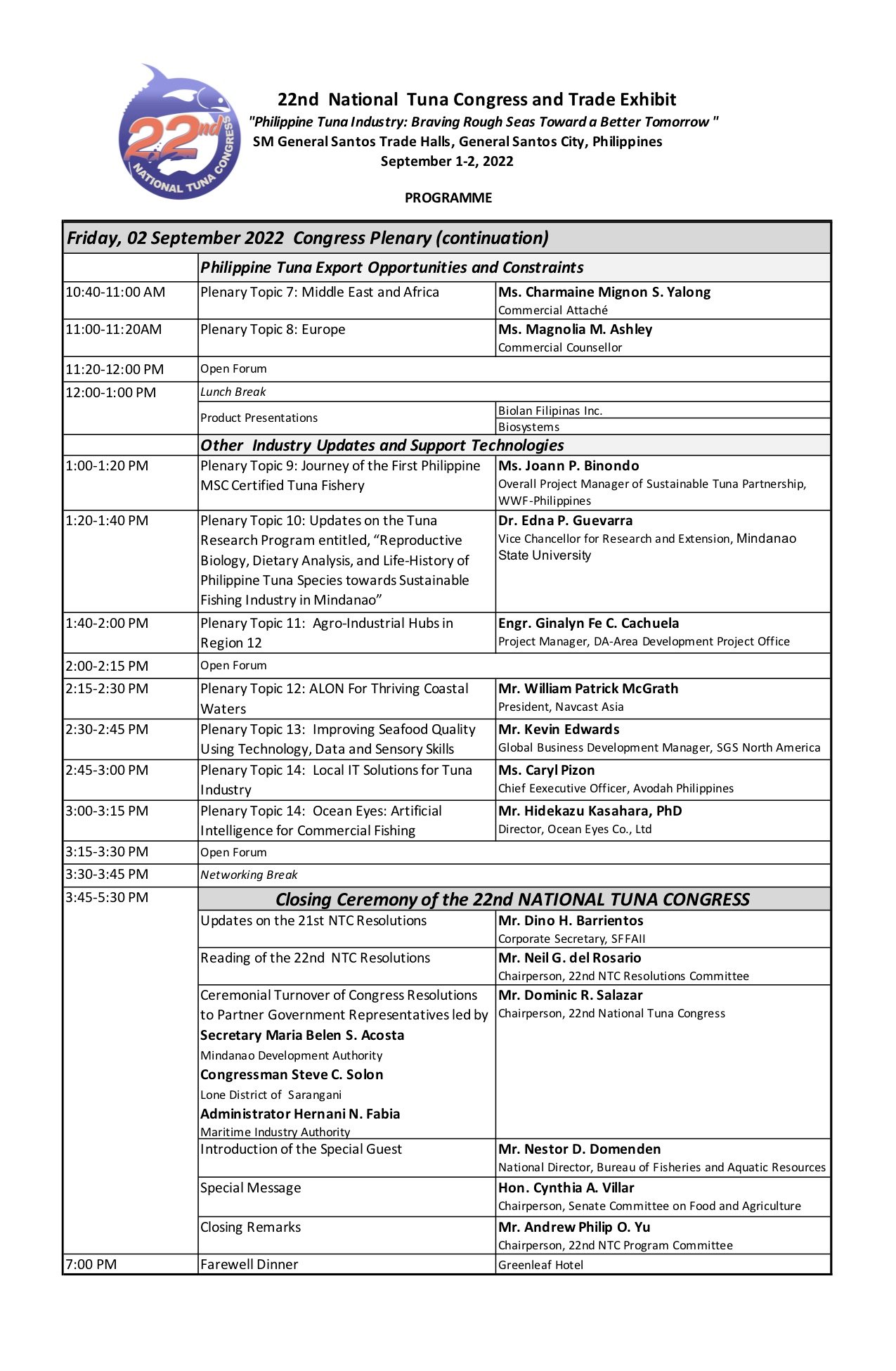 The Local Government Unit of General Santos City, in partnership with the General Santos City Chamber of Commerce and Industry, Inc. (GSCCCII) will bring back the most-awaited and largest industry-based festival in the Philippines, the 24th GENERAL SANTOS CITY TUNA FESTIVAL on September 1-30, 2022.

Having a theme of “Pista ng Karagatan (Feast of the Sea)”, the LGU-Gensan and GSCCCII will stage this year’s festival, reviving and reminiscing the festival every General missed during the pandemic, in line with the tagline “Ibalik ang Saya at Sigla!”.

This year’s month-long Tuna Festival shall feature the following highlights where all Generals are welcome to witness:

This year’s festival will begin with the Float Parade alongside with the motorcade to be participated by civic organizations, members of the private sector, sponsors, and candidates for the Street Dancing Competition- Cheer Dance Edition. This will begin at KCC Mall of Gensan at 1:00 PM with the Oval Plaza as the end point.

Following the parade, the showcase of the Street Dancing Competition- Cheer Dance Edition shall immediately follow, with contingents coming from all over Mindanao.

The Opening Salvo, which will succeed the culmination of the Float Parade and Cheer Dancing Competition, shall be attended by VIPs and dignitaries invited by the LGU. The Opening Salvo is sponsored by the General Santos City League of Events Organizers (GLEO) and will be heavily covered by a national network, featuring the events of the 24th Tuna Festival, sponsors, organizers, and festival stories. The opening salvo will also have a star-studded show with celebrities coming from the GMA Network.

The Closing Ceremonies on September 5, 2022 will begin with a Civic and Military Parade beginning 4:30 PM and will be followed by a closing program. The GSCCCII will also hold a celebrity concert, the BGYO, sponsored by Smart Communications, followed by Fireworks Display and local live band show. 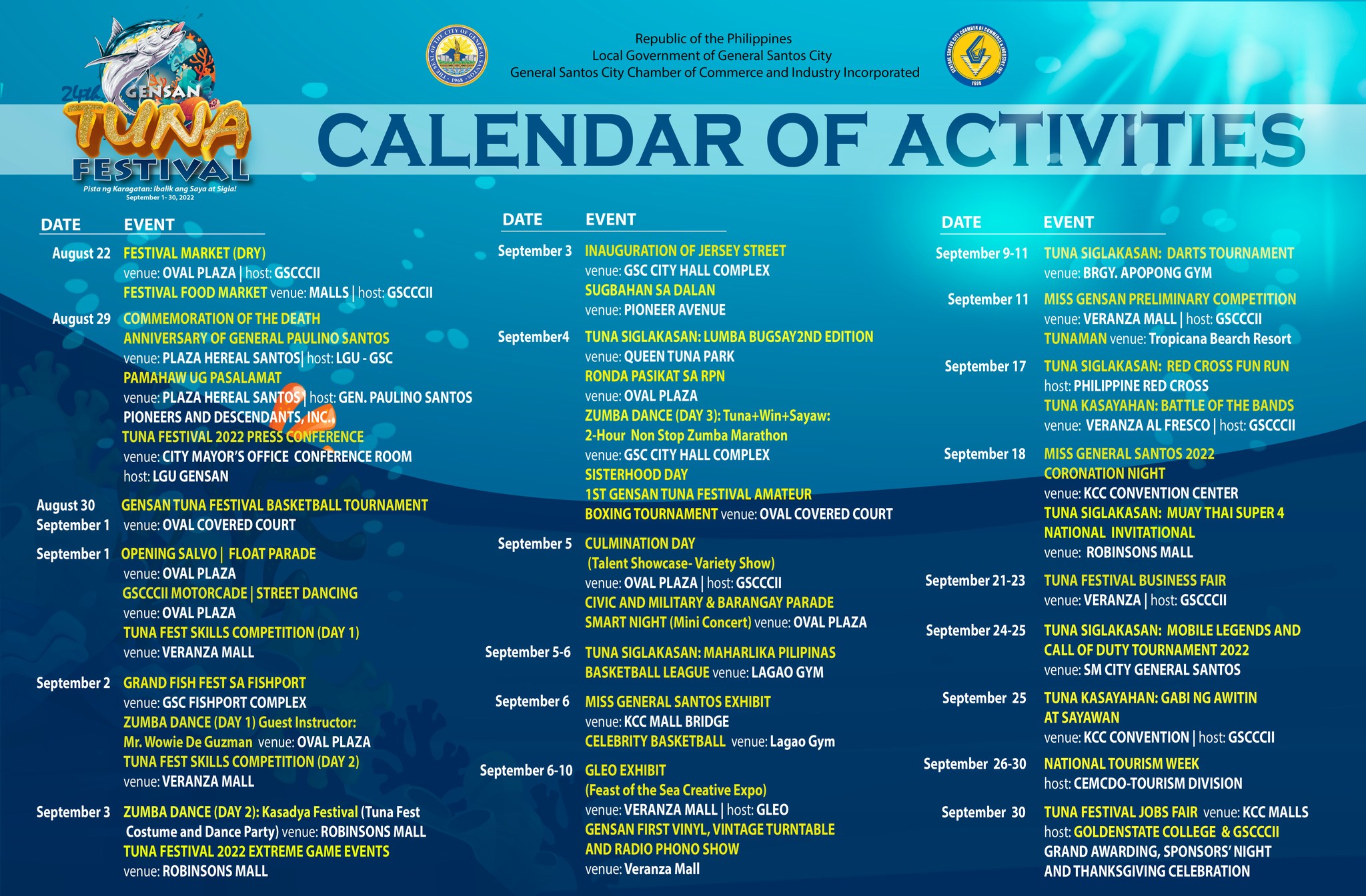 - organized by the Goldenstate College on September 1-2, 2022 at Veranza Mall, which will be participated by Elementary, High School and College Students.

- a traditional three-hour marathon organized by the GSCCCII projecting to hold at least 500 participants. This three-day marathon shall be at Oval Plaza, with Mr. Wowie De Guzman as the celebrity guest during the opening at September 2, 2022, and at Robinsons Mall and KCC Mall of Gensan.

- an institutional event for this year’s Tuna Festival which will be participated and open for everyone on September 3, 2022, 5:00 PM at Pioneer Avenue. Participating groups will be from the LGU, civic organizations, business companies, private sector representatives, and volunteers.

- The General Santos City League of Events Organizers, will sponsor and launch their organization as the official partner of the LGU for events. Make-up artists, photographers, videographers, and designers in General Santos and those from nearby cities and municipalities will be invited to grace the occasion and will participate in the expo.

- Tuna Kasayahan involves the socio-cultural and entertainment activities of the festival and shall include the Ronda Pasikat sa RPN on September 4, Battle of the Bands on September 17, 2022, and Gabi ng Awitin at Sayawan on September 25, 2022.

-  The Miss General Santos 2022 is organized by the GSCCCII and GLEO. There will be fifteen (15) official candidates and this event will be covered by a national network. The 1stMiss General Santos Pageant shall be graced by no other than the Miss Universe Philippines National Director Ms. Shamcey Supsup and many other big celebrities. The pageant is in the direction for the city to provide the official candidate for the Miss Universe Philippines next year.

The Business Fair will highlight the SMEs of the city. This will be on September 21-23 at Veranza Mall.

The GSCCCII and Tuna Festival will join the LGU-CEMCDO in celebrating the National Tourism Week on September 26-30, 2022.

The Tuna Festival Jobs Fair shall be organized by the GSCCCII, Goldenstate College and CMO-PESO. The activity will invite employers from General Santos City and nearby regions to provide employment to all Generals.

Having Certification International Philippines, Inc. (CIPI) as the LGU’s third-party certifying body (TPCB) for its ISO 9001:2015 certification, the Local Government Unit of General Santos City (LGU-GenSan) is now preparing for its very first Stage 1 Audit on the 23rd and 24th day of August 2022.

A remote audit will be done to validate the conformance of the city government to quality documentation as specified in the international standards such as but not limited to the Quality Policy, Quality Manual, and other documentation. A Stage 2 audit will be conducted after the first to verify its implementation based on the established processes vis-à-vis documentation.

With this, the City of General Santos will now be one step closer to earning the ISO 9001:2015 Certification with the support and leadership of the new City Mayor Lorelie Geronimo Pacquiao.